$
$
%
Months
Your Monthly Payment is: 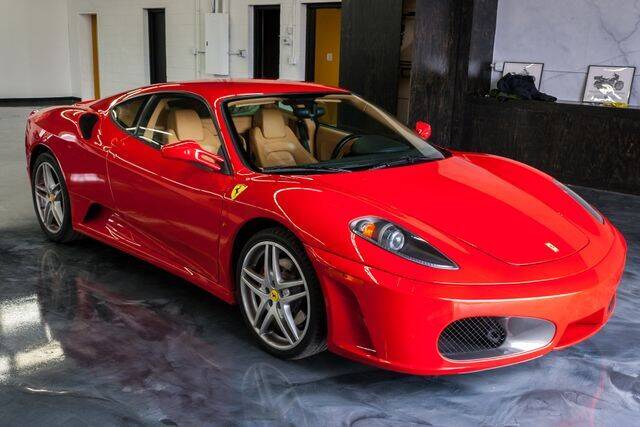 Ready for a test drive?
Let us know what works for you.
Have additional questions?
Give us a call and we'd be happy to help!

This 60th Anniversary Ferrari F430 is in showroom quality condition with a Ferrari Certified Gated 6-Speed Conversion. This is car is 1 of 1 with this exclusive conversion in the classic Ferrari Red on Tan color combination. Clean CarFax!Designed by Pininfarina, under the guidance of Frank Stephenson, the body styling of the F430 was revised from its predecessor, the Ferrari 360, to improve its aerodynamic efficiency. Although the drag coefficient remained the same, downforce was greatly enhanced. Despite sharing the same basic Alcoa Aluminium chassis, roof line, doors and glass, the car looked significantly different from the 360. A great extent of Ferrari heritage was included in the exterior design. At the rear, the Enzo's tail lights and engine cover vents were added. The car's name was etched on the Testarossa-styled driver's side mirror. The large oval openings in the front bumper are reminiscent of Ferrari racing models from the 60s, specifically the 156 'sharknose' Formula One car and 250 TR61 Le Mans cars of Phil Hill.EngineThe F430 features a 4,308 cc (4.3 L) V8 petrol engine of the 'Ferrari-Maserati' F136 family. This new power plant was a significant departure for Ferrari, as all previous Ferrari V8's were descendants of the Dino racing program of the 1950s. This fifty-year development cycle came to an end with the entirely new 4.3L engine used in the F430, the architecture of which is expected to replace the Dino-derived V12 in most other Ferrari cars. The engine's output specifications are: 490 PS (360 kW; 483 hp),[8] at 8,500 rpm and 465 N&sdot;m (343 lb&sdot;ft) of torque at 5,250 rpm, 80% of which is available below 3,500 rpm. Despite a 20% increase in displacement, engine weight grew by only 4 kg (8.8 lb) along with a decrease in diameter for easier packaging. The connecting rods, pistons and crankshaft were all entirely new, while the 4-valve cylinder head, valves and intake trumpets were directly retained from Formula 1 engines, for ideal volumetric efficiency. The F430 has a top speed in excess of 196 mph (315 km/h)[9] and can accelerate from 0 to 60 mph (97 km/h) in 3.6 seconds

Be protected. Check for open recalls:

By placing this call you agree to the Terms and Conditions of Use of this website and that this call may be recorded by RoseLux Motors LLC, using technology powered by Carsforsale.com, for business purposes.

Enter your phone number or email address to receive this VIN

Success! Your message has been sent.

Uh oh! There was an error sending your message. Please try again in a few moments.

By placing this call you agree to the Terms and Conditions of Use of this website and that this call may be recorded by RoseLux Motors LLC, using technology powered by Carsforsale.com, for business purposes.